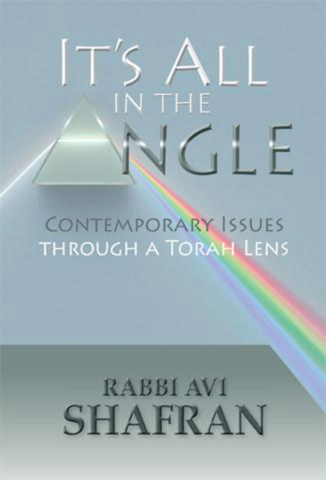 Consider a gift of literate, Torah-based perspectives for a friend, relative or co-worker.

“It’s All in the Angle” (Torah Temimah Publications), a collection of selected essays by Rabbi Shafran, is now available from Judaica Press.

Some comments about the essays:

“For many years, Rabbi Avi Shafran has been presenting a perspective on current issues and basic Torah ideas in many forums, among them as spokesman of Agudath Israel of America. He has done this through insightful thinking expressed in brilliant writing. It is gratifying that he is now publishing his writings in a book which will greatly enhance contemporary English Torah literature.”

“I always look forward to reading Avi Shafran’s writings. They are invariably on the mark: well thought out, well written, provocative — what could be a better combination? From all angles, he is a cut above the rest.”

“Rabbi Shafran’s consistently insightful analysis of contemporary events and challenging issues invariably reflects a profound appreciation for Torah-true Judaism at the highest level. His superb language skills and considerable secular knowledge, together with proven bona fides as a legitimate Torah scholar, emerge gracefully in every writing.”

“Sometimes it’s a predictable polemic in defense of Orthodoxy and Orthodox Jews; sometimes it’s a not-so-predictable comment on current events. And every so often it is an observation about the world and humanity and the soul that can take your breath away.”

“I look forward eagerly to Avi Shafran’s essays and ruminations, and am rarely disappointed.  They are always elegant, and though I frequently disagree with their thrust, there are times—the best of times—they force me to rethink my own positions.”

[Rabbi Shafran’s essays] “present an authentic account of the Torah’s teachings today… I rely on them for setting the standard of integrity in presenting normative Judaism to contemporary culture and politics.”

“A lot of journalism is ephemeral — here today and gone tomorrow — but Rabbi Shafran’s words endure. And that is because he writes about things that matter in a compelling and entertaining way. He provides a clear window into how the Orthodox world sees a variety of issues, from science to politics to contemporary culture, and he is not afraid to ask tough questions. Most of all, Rabbi Shafran is a great storyteller who gently guides the reader along. We are all the richer for his insights and guidance.”

OTHER BOOKS THAT MAY BE OF INTEREST :

Rabbi Simcha Shafran’s recollections of his youth in Poland, his sojourn in a Societ labor camp in Siberia during WW II and his career as a rabbi of a congregation in Baltimore — written with his son, Rabbi Avi Shafran. 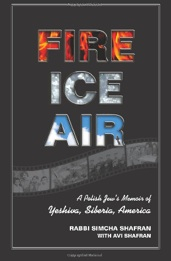 The true story of a part-native American, part-black man’s journey, with his Jewish wife, to observant Judaism. 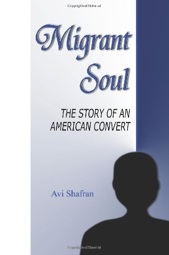 If you found anything you read here stimulating, interesting, share-able or infuriating (i.e. thought-provoking) and want to register your appreciation and support this site with a gratuity, please click on "donate" above. All proceeds will go to help support Torah scholars engaged in full-time study and teaching.