I was privileged and humbled to be asked to join a group of rabbis more distinguished than I and spanning the Sephardic, Yeshivish, Hasidic, Kiruv and Centrist Orthodox world to deliver an important message.  The signatories are immediately below; and the letter, below that.

The text of the statement:

As rabbonim and mechanchim, we are greatly concerned about the popularity in some circles of a “kiruv” approach that does not bring honor to the Torah ha-Kedoshah but, on the contrary, creates considerable chilul Hashem.

Earlier this year, Rabbi Yosef Mizrachi apologized for one particularly offensive statement he made on several occasions. But he has voiced, both before and since that apology, many things that reduce complex issues to simplistic and misleading sound bites. He has also repeatedly arrogated to “know” why unfortunate things happen to various people and has presented subtle statements of Chazal in superficial and deceptive ways.

That method may entertain and even stimulate some audiences, but it does no justice to the Jewish mesorah. And, especially with the worldwide audience enjoyed by any public speech these days, misleading assertions even when offered with the best of intentions, are particularly objectionable, and even dangerous.

Jewish institutions must be discerning about the credentials and the histories of those to whom they offer the honor of acting as teachers of Torah. We urge all shuls and organizations to act responsibly and take seriously decisions about whom they invite to address their gatherings. 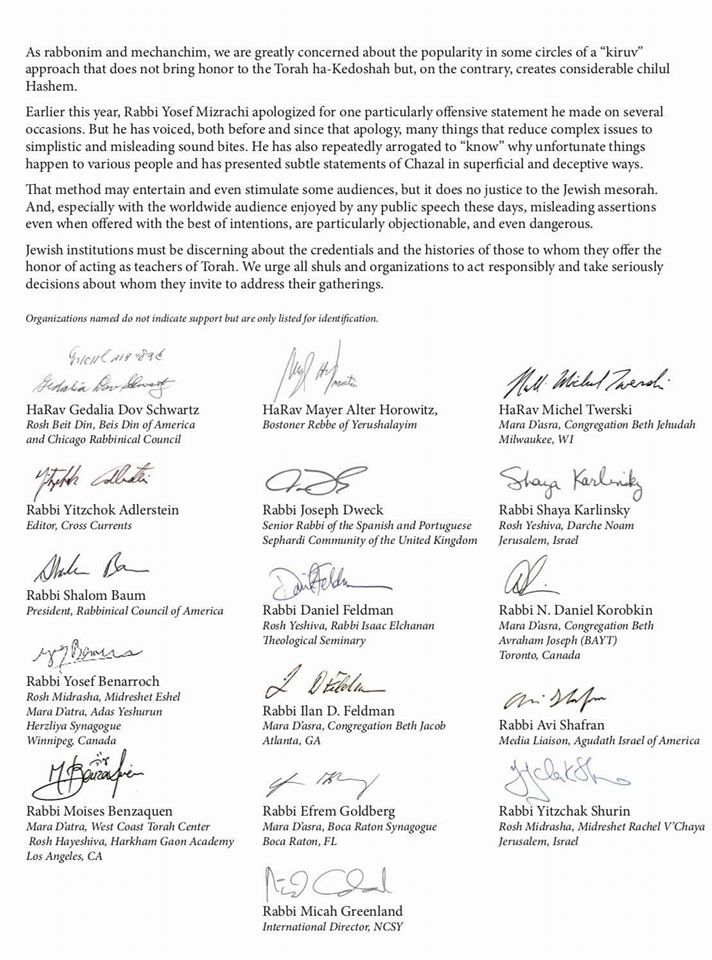 Spread the love
Click here to receive email updates
If you found anything you read here stimulating, interesting, share-able or infuriating (i.e. thought-provoking) and want to register your appreciation and support this site with a gratuity, please click on "donate" above. All proceeds will go to help support Torah scholars engaged in full-time study and teaching.